There must be few places in the world as thrilling for watching birds than the Shetland Islands. The islands are famed for a huge variety of birds, with over 450 species sightings recorded. In summer, the towering cliffs are home to tens of thousands of puffins, kittiwakes, guillemots, razorbills and gannets. They come on land to lay their eggs and rear their chicks.

Shetland lies between the arctic and sub-arctic areas to the north, the Scandinavian land mass to the east and the warmer climes to the south. This puts the islands right in the centre of the migratory flight paths of a multitude of species. In addition to the ‘normal’ migrants, there are the rarities which cause great excitement and draw ‘twitchers’ from all over the globe!

Shetland has more above-ground ruins of pre Iron Age houses than any other place of equivalent area in Europe. There is an abundance of ruins and artefacts bearing witness to the Neolithic period, the Bronze Age followed by the Iron Age. The late Iron Age is characterised by Pictish culture and all culminating in the arrival of Vikings from the west coast of Norway round about 800 AD. Jarlshof, Old Scatness, Mousa broch, Staneydale ‘Temple’, Viking Unst are among the many musts for the archaeology enthusiast.

Although a mere 556 square miles (1,420 square km), Shetland boasts a historical heritage as rich as anywhere else in the UK. For example, Shetland has more above-ground ruins of pre-Iron Age dwellings than any other area in Europe of comparable size. Surrounded by ocean, the centuries have seen vital connections with the Vikings from the west coast of Norway, traders from Germany, fishermen from Holland and especially from the 16th century onwards, the advent of incomers from mainland Scotland. Shetlands history embraces prehistoric times, the Norse era, the Stewart earls, the dark days of the 17th-19th centuries when the landowners (lairds) ruled and deadly diseases were rife, right up to the present day, especially in the 1970s, when the advent of the oil industry forever changed the face of Shetland.

Discover Shetland boats and the sea

Shetland, the sea and boats have been inseparable from time immemorial. There are not many Shetland men who do not have a peerie (small) boat. And some have very big boats indeed such as the £32 million pelagic fishing boats! Shetland fishing boats land more white fish (cod, haddock, whiting), than all of the fishing ports in England, Ireland and Wales put together!!

Shetland’s 556 square miles (1420 square km) forms a tiny 0.6% of the land surface of the UK but has a richer and more dramatic geological history than any comparable area in Britain. Shetland is a UNESCO Global Geopark because of its extraordinarily diverse and internationally important geological heritage. Bird life, wild flowers, human activity, landscape and scenery are all intricately connected to the rocks that lie beneath our feet.

What bonnier sight could there be than meadows, marshes and roadside verges ablaze with colour in the all too brief months of summer. Shetland is home to a number of species that are endemic to the island; that is they are not known to grow in any other part of the world!

Ponies and puffins please! – these are the two most popular requests for me from visitors coming to Shetland. The Shetland pony is iconic of the islands. Unlike puffins which are only here for a few weeks in summer, ponies are widespread and present all the year round. 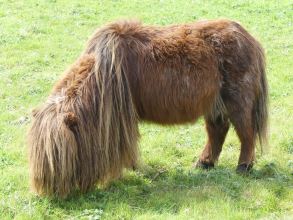 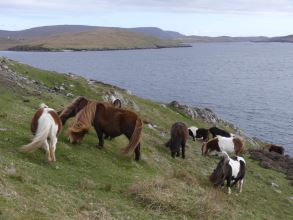 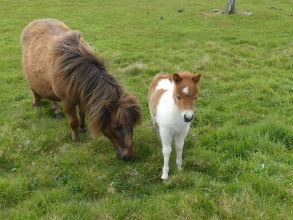 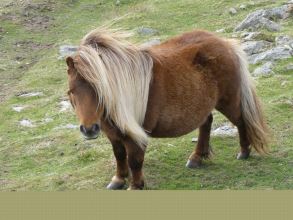 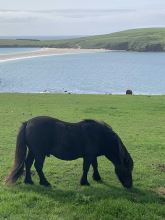 In April 1940, Norway fell to Nazi Germany and a secret resistance movement was set up in Shetland. Operations were initially in Lerwick then Lunna and then eventually transferred to Scalloway. For those interested in this subject, a visit to the Scalloway Museum (when open) is a must.

‘The film ‘Shetland’ is a crime drama TV series based on the works of Ann Cleaves. There have now been six series with a seventh due to come out this year. Star of the show is detective inspector Jimmy Perez (Douglas Henshall) who in 2016 won the BAFTA Scotland award for best actor, and indeed the series received the award for best TV drama. Jimmy is ably assisted by ‘detective sergeant ‘Tosh’ (Alison O’Donnell). On my tours, I am surprised how few British people watch the series or have even heard of it but it has a fanatic fanbase overseas particularly in Canada, USA, Australia and New Zealand.

Since commencing tour guiding in 2015 I have had over 90 women on tour who have travelled to Shetland on their own; this is in sharp contrast to 9 men! A number of women agreed to take part in a short survey which I carried out. One-third (33%) of them had come to Shetland because of  the film ‘Shetland’. Many more visitors are excited to see some of the places associated with the series albeit it is not the reason they have come to Shetland. Top of the list is Jimmy’s house (‘The Lodberrie’) in Lerwick, shown below.

Ready to book your tour?